The land reflects the very varied Montpeyroux terroir, situated as it is between mountainous land, hillsides and valleys, with complex, diverse geology. 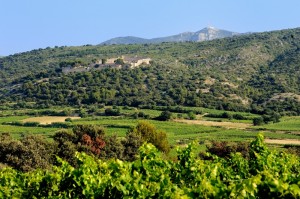 MONTPEYROUX and its terroirs : Situated at 40 kilometres to the north of Montpellier and some fifty from the Mediterranean, Montpeyroux’s terroir is incredibly varied (vines, olive groves, wild garrigue, pine groves, green oak woodland, small farmers’ crofts), covering crests and peaks, hillsides, terraces and little valleys. Mostly south facing it is protected from the north by the foothills of the Larzac and Mount Saint Baudille (848 metres high) and to the east by the mountains around Saint-Guilhem-le-Desert. The commune’s name stems from the surrounding heights since in Occitan Montpeyroux means “stony mountain”.
Most land under vines is around 90 and 180 metres in altitude, with one small area at around 300 metres on the Causse du Larzac.
The geology of land around Montpeyroux is fascinating and exceedingly varied, ranging from Jurassic to the Quartenary, On the whole the Appellation’s soil lacks fertility and mostly drains well. Some is calcerous clay, elsewhere hard dolomitic limestone, with terraces of limestone pebbles and shingle. It’s these different soils that are responsible for the very special Montpeyroux characteristics.
The climate is typically Mediterranean, yet the strong north and north-west winds that gust down from the nearby plateau refresh the terroir, even giving the name Col de Vent (windy pass) to a stretch between Arboras and Mount Baudille !